I’m working on a full page with animations, I hope to be finished this weekend sometime. I have a bunch of sketches to post as well.

I wrote like a page and a half this morning. It needs serious editing but it felt good, I haven’t been able to capture anything for a couple of weeks.

Just found this person the internets, Emily Carrol, a cool site of this woman’s comics and portfolio. It is of particular interest to me because she does a illustrated dream journal pages. They are fully painted and rather beautiful. She also made this video game Gone Home which looks wonderful and to be a very interesting and interactive approach to story telling.

I am in the middle of a class at RISD, I have a couple of cool projects I’m working on for that but I figure I am going to do a full process post for each of them when I am finished.

practicing digital coloring techniques using layers and shades and color holds. It’s nice to have a computer that works. Original drawing a sketch book thing I did from Sweet Tooth by Jeff Lemire. I’m not crazy about giving money to Marvel or DC these days but I have a couple of creator owned exceptions. 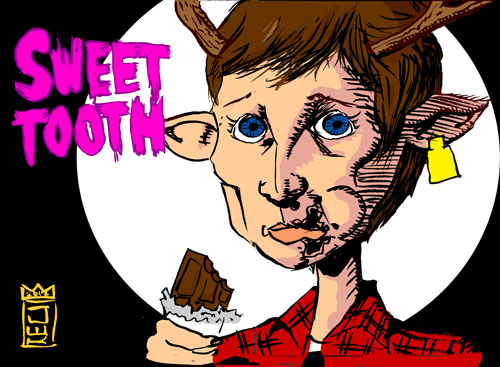 Its October. I was trying to post once a month but I am easily distracted and busy with work and school. This one is a roundup of cool stuff I have been reading, etc. Nothing new from me, I really need to get around to scanning some more artwork. I have been working on the outline/script for Strange Weather because I have pretty much had to redraw the whole thing so far due to rewrites. That is time consuming. I’ve come up with a name for one of the others (The Substance) which I was inking the prelude to last week. The witch house/ fairy story is still nameless as is the 70s scifi pastiche. I am lame.

I watched the Avengers cartoon that came out last year and its wonderful. Its similar to the Bruce Timm Batman series in that it modifies the source material stylistically while retaining the things essential to it. Keeping the heart and soul if you will. One of the ways this was achieved was by keeping the stories straight up kirby. A healthy dose of  the theatrical  releases and ultimates are thrown in to make things a bit more contmeporary. It’s what I remember Marvel being. It also has an incredibly shitty theme song, something so ubiquitous I would describe it as a trend. Its on netflix streaming or whatever that service is called these days.

I got a bunch of cool indy comics shit in the mail. 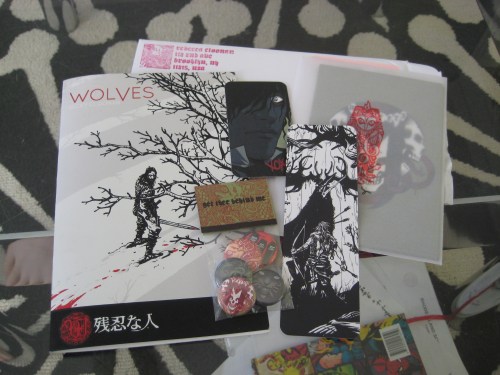 quasi horror comic originally written for a japanese compilation. The story is pretty awesome but i cant really say anything about it without spoiling it really. The comic it self is beautifully printed. There is a lot of really cool design going on here as well. her business card says “comics rules everything around me”. somewhere in that pile it says “life aint nothing but comics and money”. fuck, yeah. 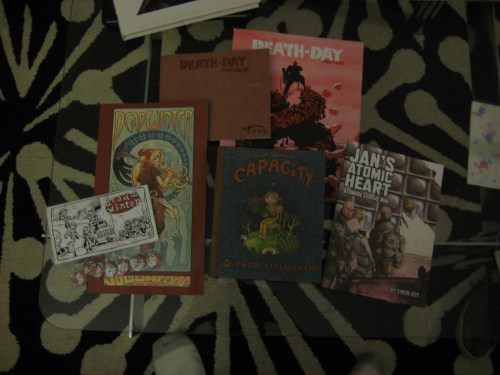 These are comics that are interesting, well written and nice to look at. They are also doing on their own, so despite my empty wallet, I feel it is my duty to support them. Read and buy their books.

Rice Boy by Evan Dahm. all of it is good. and its all interconnected. Tolkein by way of Bodie. Read it: Order of tales, Rice boy and Vattu ( current).

Freakangels has ended and left a freakangel sized hole in my Fridays.

Studio is  coherent but still a fucking mess. I started a painting, started being the key word here. no idea where to go with it. I have a stack of drawings i need to scan, my computer sit is still a disaster. I think I am switching to mint. we will see.

I wish I could write reviews for all this shit but frankly I am pressed for time. always. and I think my girlfriend wants to go out. so, good night and go fuck yourself san diego.

So this guy Dave Shabet does this web-comic called Dead Winter which is something special. It’s a story about a zombie apocalypse which in itself is kind of played but like most stories revolving around that premise, it’s emotional core is the survivors. It’s pretty gruesome at parts and actually kind of cute at others and very charming. I think he draws it all on the computer, something I’m normally a little wary of, but it is done to great effect here. Like a lot of webcomics you get to see his progression as an artist but the thing that makes it special is his exploration of the unique possibilities of webcomics versus print comics. The result is this wonderful mix of print and animation that is specific and very purposeful as opposed to those shitty “motion comics” where something static is made into a half assed cartoon. It’s primarily a black and white comic with red color cues that dissolves into a color book every 20 pages or so (when dealing with a dreamscape) There were flirtations with adding animated elements early on which were startling and well awesome and well why hadn’t someone else done it before? They are small and interesting like an animated gif, but add a wonderful dimension to the comic. Every 100 pages or so, he does a full animated page that plays out in a sequence and then shows a static version of the page. It’s up to page 400 and is updated fairly regularly.

Anyway. Its awesome. Its innovative. It’s creator owned. Support it.

I am disorganized and attempting to fix that.
I will have drawings up by the end of the week in the meantime Here are links to the Moebius tumblr and the Otomo tumblr one being inspired by the other. Very cool shit.
I am actually putting more than just drawings up Friday its the beginning of a some comics projects I’ve been working on. I’m trying to take a next step. I finished this last night and took a really quick picture of it this morning. Its pretty cool I guess, it’s the first time I’ve used a coffee wash for the back ground, something I picked up from Angelique Houtkamp’s Tattoo Darling book. 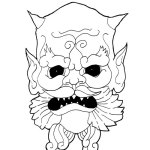 Here is the second one. I light boxed it onto watercolor paper yesterday and scanned it this morning. I think I’m going to do a digitally colored version in addition to the watercolor painting.

I was going to post comic pages but I cant find the files or they aren’t on my thumb drive, which means they’re on my home computer and it’s gonna take me a year to put something together I can show.

no drawing today. I’ve just been reading comics blogs and thinking about process and inspiration. I’m gonna try to put together a inspiration post over the course of this weekend with pictures and links to things i’ve been into this lately. Things like Brandon Graham and his awesome work and equally entertaining and informative blog, that particular gang of comics guys, some shit i was into when I was kid, maybe some exerpts from old sketch books, and link to a slew of top notch web comics and maybe a close friend or two.

I’m really excited a bout doing and drawing at the moment, probably more than I’ve ever been. It’s carried over to a lot of different things one of them being my mind numbing soul sucking job. If I have to be here I am going to use it as an opportunity to become a better designer, which will hopefully make me a better artist and writer as a result.

Last night prior to having a significant amount of my hearing taken away from me forever, I was talking to my friend mark, and we were say how you dont really need to know how to do something in order to do it. You say “yes, I can do that” and then you figure it the fuck out! Naturally this doesnt apply to things like flying a jet or surgery, but thats how people figured how to do things in the first place. There is a saying that goes “you get good at kung fu by doing kung fu” which i will attribute to my sifu Stanly Ju, which is infinitely applicable. I feel like some blinders have been taken off, like i’ve rounded some corner. A lot of things that seemed like they would take forever are just coming naturally. Most things just take doing, and then keep doing it.