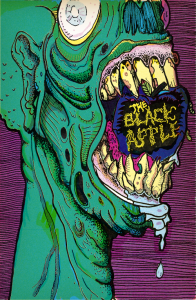 In a couple of weeks I will be vending my nefarious wares at the 2019 Necronomicon! I will have Shirts, Patches, Stickers, Comics, Art and stuff! Come on down and get a sticker or a comic or a shirt. gonna be selling originals too! Come get some aht fer yeh wahls ked! I will also be debuting The Black Apple, a horror anthology of fairy tales and stories of woe. The titular apple is the fruit of knowledge that brings misery.In the grand tradition of Tales from the Crypt! Heavy Metal! Hustler! Better Homes and Gardens! American Rifleman! Yoga Butt Daily! Featuring the work of comics makers and art type peoples from Providence and beyond! Available for preorder HERE!

Where I talk about shit that I wish I was doing and sort of kind of am trying to do.

END_OF_DOCUMENT_TOKEN_TO_BE_REPLACED

lessons learned from dreams: on space travel
traditional space travel is very crude. The idea of going very fast and expending an enormous amount of energy is not only inefficient but incredibly wasteful. I fact I was admonished about after completely the first trans-galactic flight only to find my next door neighbor there waiting for me. or at least I thought it was the first. as it turns out sequence is also widely misunderstood. rocket travel, he went on to say is akin to trying to take your pants off by unraveling the threads starting at the leg opening. It is much easier to use the zipper. Apparently, he used tesseracts and then can go anywhere he can think of, as long as he knows where it is. “we’re the last generation who has to do this, our kids won’t have the limitation or perception, having grown up with it. They will be able to be everywhere at once. They already are.” He also recommended that we do not put any settlements around the graveyard. “There are noises coming from underneath it”

I’m gonna be selling all the stuff I do. I set up a storefront site over at http://dudesburroughpress.bigcartel.com/.

Not much atm but it will include prints, comics and the like, hopefully shirts patches and pins eventually.

Right now you can buy a picture of a monkey on commission. NO TWO MONKEYS THE SAME! BUY ONE, BUY TWO! THE MAKE GREAT GIFTS!

Remember when I used to post stuff? Yeah, neither do I. I had a decent run and then spent and an inordinate amount of time trying to figure out how to make this everything I wanted it to be. I wanted a portfolio, sketch, blog, and comics site. Well, I am coming really close to three of those, But I can’t figure out how to make the comics work. It’s bumming me out because that was the idea for this site to begin with. Slowly but surely I am populating the portfolio section, but I wish I could make everything work. Ultimately I may have comics live somewhere else, just out of necessity. Just do art and design and some blog crap here. I wish I had the time, and patience, and, well, the computer to learn the web stuff. But I don’t.

at least it looks nice.

Next up: profile pic from this decade!

I just finished  a poster class at risd. one of the three final classes i need in order to have all the credits for my certificate. Taking a letterpress class right now and then one more. Maybe a professional Identity?

Went through piles of work and found a stash of about 16-20 unfinished comic pages and a bunch of other stuff. Planning some new design for the site in the about and landing page, as well as some new navigation. Stayed up late and finished a couple of pages last night over the course of the next few weeks will update all the comic pages. This should make it so that I have a decent preamble for a couple of stories. Started putting school work up on behance/risd site. Photographing some actual professional work to put up. I might also be teaching a class about zombies to kids in the spring!

Been reading a lot of Usagi Yojimbo. It’s like a master class in making good comics. Pretty much every aspect of that book is well thought out and masterfully executed. The amount of research is staggering and meticulous. The artwork, while it started very solid, becomes more lyrical as the series progresses. Stan Sakai has an very intuitive grasp of what to show and what not to, reading flow, composition, and line. He has also won Eisners for his lettering.

Hi there invisible readers who do not exist. Long time no see.
I just finished up my final studio for my Graphic Design certificate at RISD! What does that mean? Your guess is a as good as mine. I hope i get a better job. or turn my personal stuff into a job.
Actually it means a couple of things:
I’m completely overhauling my portfolio section to reflect the things I did in the program. I also want to add some more drawings and stuff.
I will be updating my bio section with my resume and professional ID. I think some newer pictures of my ugly mug will be in order as well.
I will be resuming updates on Deth Bunny. Dear god I just want to finish one issue.

I want to update this blog/artsite more regularly.
I am going to need to figure out a decent schedule and stick to it, not that any one reads this. Weekly will most likely be out of the question. Bi weekly? yeah that sounds good. Just curious, not serious.
So whaddya think: July 1st. I’ll have the new stuff up and then try to go from there. Yeah, I think that’s a good idea too.

heres the page I was working on as a proof of concept for a new comic. It’s about a girl who is the half fairy daughter of a fairy king in a world about 40 years after two world wars fought between humans and fae. it’s kind of epic. I havent gotten a goddamn thing done in two weeks because I turned forty and my little sister got married. oh and my computer died. the death of forever. today I learned about sftp and ssh.

well not really but I learned how to use that protocol to update my site. I havent been able to do it in like forever, but now it is up and all the plugins have been restored and things are going swimmingly. I have three pages penciled and two more to do and then chapter one is done. Crazy. I AM GONNA GO WATCH THE GAYS MARCH IN THE STREET NOW.

it really has been a learning process so far.

I made a mock-up of a twenty (thats 16 guts and a cover)  page comic today to see what more I need to do and to see who it looks reduce and imposed and all.

for the most part, it looks pretty good. especially for a first comic.. I am redrawing the first three panel strip in to a full page and splitting the first two bob and jeff landscape pages into four portrait ones. Thats gonna bring it up to five new pages to draw and ink. Theyre redraws and I ddi the thumbs tonight so I dont think it will take that long. A lot of stuff needs to be relettered. It should be pretty cool. It will be for sale on this site and at a couple of local comic stores. I’m gonna go to bed now before I fall asleep on my face. 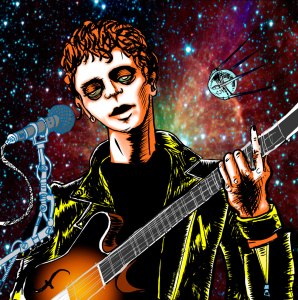 Hiya, Long time.
How are you?
Really?
wow.
and your Mom?
man thats great.
Me, well I’ve been buried under seven feet of snow for months now! I took a couple of classes. one went well and the other, not so much, but I still managed to get something out of it. There was a death in the family after a prolonged illness. I grew a beard. Production got all fershnagled on Deth Bunny but I have a new page, another one for next week and enough to finish the first issue!

Anyway, here’s some shizz I’ve been working on. 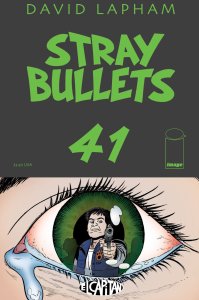 Playing around with coloring techniques on photoshop.
did a quick self portrait. 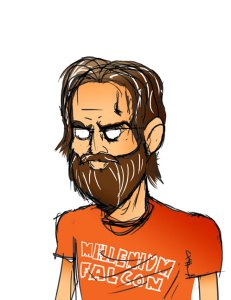 and a sketch of a delinquent werewolf from an upcoming Lessons learned from dreams. Some day I will bother with formating these things. Two weeks behind on Deth bunny. Will have a new page next week. I spent quite a bit of time on this. It spins a bit too fast in the original. I figured it could use its own place.