I just finished  a poster class at risd. one of the three final classes i need in order to have all the credits for my certificate. Taking a letterpress class right now and then one more. Maybe a professional Identity?

Went through piles of work and found a stash of about 16-20 unfinished comic pages and a bunch of other stuff. Planning some new design for the site in the about and landing page, as well as some new navigation. Stayed up late and finished a couple of pages last night over the course of the next few weeks will update all the comic pages. This should make it so that I have a decent preamble for a couple of stories. Started putting school work up on behance/risd site. Photographing some actual professional work to put up. I might also be teaching a class about zombies to kids in the spring!

Been reading a lot of Usagi Yojimbo. It’s like a master class in making good comics. Pretty much every aspect of that book is well thought out and masterfully executed. The amount of research is staggering and meticulous. The artwork, while it started very solid, becomes more lyrical as the series progresses. Stan Sakai has an very intuitive grasp of what to show and what not to, reading flow, composition, and line. He has also won Eisners for his lettering. 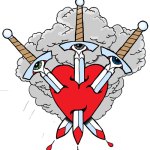 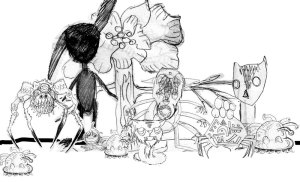 meh wordpress, you make me crazy, I have this “publicize” plugin which does not do that. or more specifically it will publicize my posts but not my comics and as much as like to have an audience when I rant about nonsense I would much rather people see my comics. So new Deth Bunny page here. I was working on anew page last night and it feels like it might be a good a idea to do some character sheets. I do a lot of guessing and guessing sucks cus maybe its right and maybe its not so right. I drew a bunch of new headers for the strip this weekend because the one I have is a stacked logo in a landscape box. its awkward.

Finished one of two final animations last night for my 1st LLFD comic. The last one is spinning cycle, that should be fun. you know like surgery. then i am going to rip the whole page apart and reconstruct it piece by piece and color it. Which will take less time than it sounds. I also started an animation class this week and I think that it will push everything forward quite a bit. Huzzah for forward motion.

Shiz I’m into this week:

white tower not so well drawn webcomic, but it works cus everything is on model and the story is compelling.

ugh, not much this week, I’ve been buried in work and havent been reading/watching/listening to anything new.