Here are some drawings from this week and some others from the past that figure in with the new ones. The drawing on the  left is a study from a sketch book. The one on the right is from a comic about a girl who becomes the host for a symbiotic sentient alien algae. There is the requisite running from the government and falling in love with a robot. She eventually discovers another person also colonized by space algae but a red variety.  Together they find out they are basically algae royalty on opposite sides of a bloody war. Well as much as space algae has blood I guess. Sort of Romeo and Juliet in the future with space algae. I wrote the concept and some story at a time I was mildly obsessed with a blue haired girl. 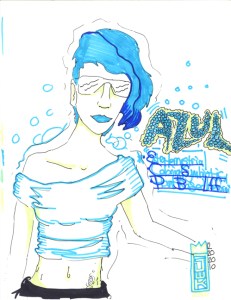 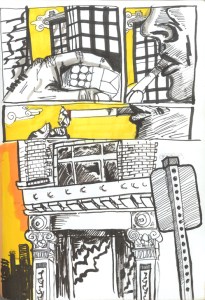 well, lets see how this comes out. 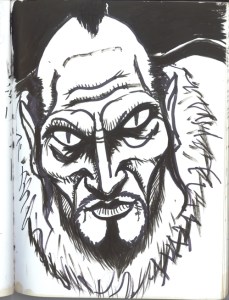 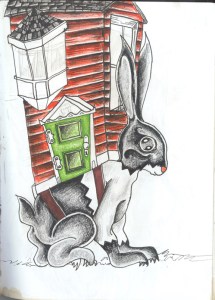 These are from a story about a boy who finds a magic elk suit and runs away from home. He gets lost in the forest and becomes embroiled in a conflict between magical super powers. The pointy faced guy is a magician who has been split into pieces by a forest prince after his flirtations with the dark arts overcame him and made him the host for an ancient god of terrible hunger. 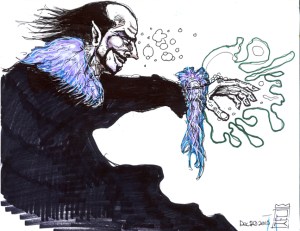 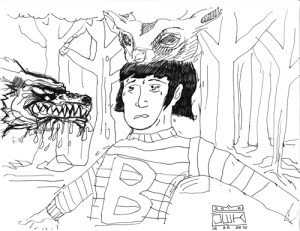 The boy believes he has killed his little brother and flees. He finds himself in the woods lost and is attacked by giant talking wolves. He is saved by a golden stag, who says, after rescuing him “you are not my brother” The boy  is then adopted by the black magician who takes him on as an apprentice. After showing him the black arts he plans to sacrifice him and take the suit for him self. healing his splintered psyche and releasing the old god. The boy learns of this and flees in to the forest where he encounters an old woman who live in a house strapped to the back of a giant rabbit. she give him some yoda style training and brings him up to speed on whats really going down. Eventually he stops running away and becomes a great magician and hero ultimately making it so he go home to his parents and brother. These are some quick drawings I did last night. 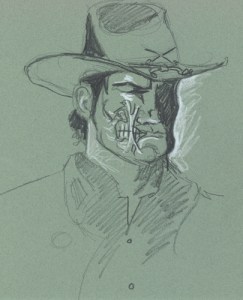 This is a pin up I did of Jonah Hex while watching the movie. The movie kinda sucked but had the potential to be really awesome. Sigh. Oh well, Megan Fox is hot, I like Mastodon. 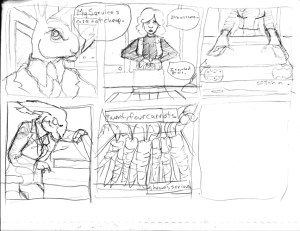 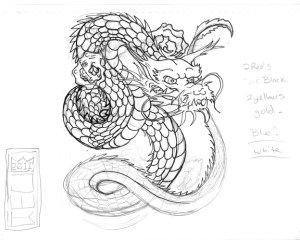 The last one is a sketch for a a painting I am doing on my dresser. It a boring white thing that I am spray painting a dragon on to. exciting. Did you know Montana spray paints don’t smell?