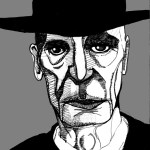 There’s a ton of stuff I want to put up, but time and computing speeds conspire against me. This is a drawing I did as a character study. It is for a aside story called exterminator, that would be a six page comic addition to amnesiac. I t has William S. Burroughs as an unnamed exterminator fumigating Hugo Blue’s apartment, while they’re both in it and calling into question his recollection of his past. This is one of the terrible ones from last weekend. It’s still a work in progress, but looks a lot better with some photoshop on it. I have to finish the flat colors and add the shades. This is the first of three drawings I did of storm. the last on is the one I like but it’s a little big to scan here.

The last thing I was working on this weekend was a couple pages of a comic that I don’t have a name for . I used to call it undisclosed metallic injection, which I think might be ok for say a chapter name, but as the title of the book, not so much.I am going to serialize it here when I get it together, maybe three pages at a time.