I’ve been doing a lot of drawing lately. Which is awesome. I can do it guilt free for the next week as well having finished my class with an A until next Tuesday when I start the next class. On top of that I have a fair amount of pro bono design work to complete by the end of the month. Busy busy, but better than not busy and you cant wait to do things or you will never do them. A friend told me “You will never have your ducks in a row” which got me thinking about the actual logistical nightmare of trying to get live ducks to line up in a row. 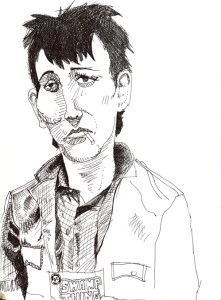 This is an unfinished sketch of Rowland S. Howard of Bday party and Crime and the City Solution fame,reading a swamp thing comic. 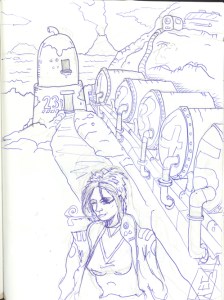 pumping station 23 from my sketch book 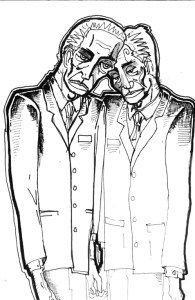 bewlay bros. jacob and louis bewlay from a story called new jerusalem. Its aboutt wo hustlers who hook up with two teenage runaways in a super right wing religious futuristic us. one of the girls is the duaghter of a senator who while having religious surface is dealing with dark forces to bring about the end of days. she becomes pregnant with the host of angels and all become embroiled in a war for the soul of humanity. the bewlay bros are the emissary of both sides and are addicted to salt water. here is a sketch for a bike messenger version of ghost rider. I imagine it as a short story about a disgraced cyclist who becomes the spirit of vengenance after mobsters try ot kill him in a drug couriering gone bad. 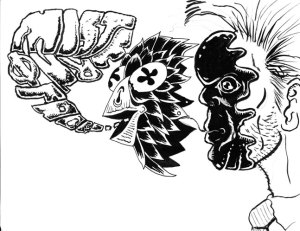 mister no face. im going to do as an absurdist mini comic. He is a surrealist detective. with no face. THERE REALLY ISNT A PLOT.